Two common combinations are D/G, often used for Morris dance tunes and similar traditional genres, and the lower-pitched G/C, favored for provincial French music–music of the countryside, that is, rather than the streets of Paris.

Scales that are a fourth apart–D and G, G and C, A and D, and so on–differ by only one note. For instance, the key of G is all natural notes (white keys on a piano) except for one sharp, F#.  The key of D has two sharps, F# and C#.  So the G row and D row differ only in that one has a C natural and one has a C#.  Because most notes are available on each of the rows, you have a choice of where to play them.  That makes this system easier to play, which is good, though it also limits the number of keys that any one instrument can play in.

The treble scale starts on the third or fourth button from your chin (when the instrument is in playing position).  The upper buttons, before the scale proper starts, are typically accidentals, usually filling out the chromatic notes of the first octave of the inside row, though custom arrangements are possible.  Some instruments have an additional half-row, further extending the instrument’s capabilities. 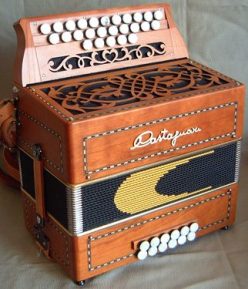 This site brought to you courtesy of The Button Box, Inc.